Adding operations to autograd requires implementing a new Function subclass for each operation. Recall that Functions are what autograd uses to compute the results and gradients, and encode the operation history. Every new function requires you to implement 2 methods: 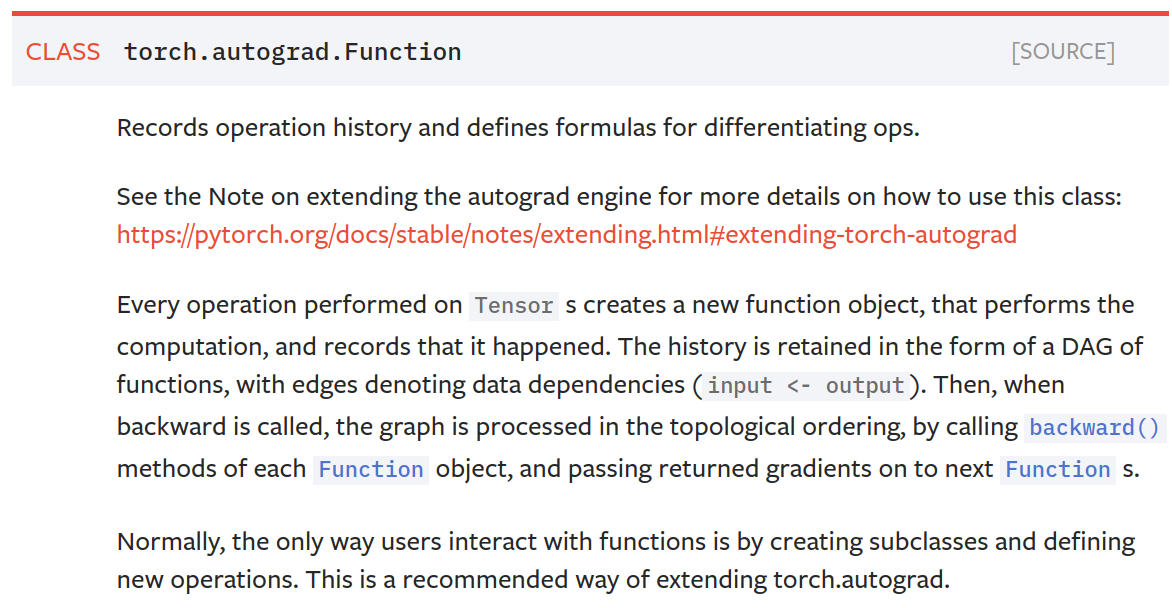 It’s the user’s responsibility to use the special functions in the forward’s ctx properly in order to ensure that the new Function works properly with the autograd engine.

Below you can find code for a Linear function from torch.nn, with additional comments:

Now, to make it easier to use these custom ops, we recommend aliasing their apply method:

Here, we give an additional example of a function that is parametrized by non-Tensor arguments:

Inputs to backward, i.e., grad_output, can also be Tensors that track history. So if backward is implemented with differentiable operations, (e.g., invocation of another custom function), higher order derivatives will work. In this case,

You probably want to check if the backward method you implemented actually computes the derivatives of your function. It is possible by comparing with numerical approximations using small finite differences:

nn exports two kinds of interfaces - modules and their functional versions. You can extend it in both ways, but we recommend using

Adding a functional version of an operation is already fully covered in the section above.

Since nn heavily utilizes autograd, adding a new Module requires implementing a Function that performs the operation and can compute the gradient. From now on let’s assume that we want to implement a Linear module and we have the function implemented as in the listing above. There’s very little code required to add this. Now, there are two functions that need to be implemented:

This is how a Linear module can be implemented:

You can create custom types that emulate Tensor by defining a custom class with methods that match Tensor. But what if you want to be able to pass these types to functions like torch.add() in the top-level torch namespace that accept Tensor operands?

Extending torch with a Tensor-like type

To make this concrete, let’s begin with a simple example that illustrates the API dispatch mechanism. We’ll create a custom type that represents a 2D scalar tensor, parametrized by the order N and value along the diagonal entries, value:

This first iteration of the design isn’t very useful. The main functionality of ScalarTensor is to provide a more compact string representation of a scalar tensor than in the base tensor class:

If we try to use this object with the torch API, we will run into issues:

It uses a global dispatch stable named HANDLED_FUNCTIONS to store custom implementations. The keys of this dictionary are functions in the torch namespace and the values are implementations for ScalarTensor.

which can be applied to the implementation of our override:

With this change we can now use torch.mean with ScalarTensor:

Of course torch.mean is an example of the simplest kind of function to override since it only takes one operand. We can use the same machinery to override a function that takes more than one operand, any one of which might be a tensor or tensor-like that defines __torch_function__, for example for torch.add():

Note that our implementation of add does not take alpha or out as keyword arguments like torch.add() does:

For speed and flexibility the __torch_function__ dispatch mechanism does not check that the signature of an override function matches the signature of the function being overridden in the torch API. For some applications ignoring optional arguments would be fine but to ensure full compatibility with Tensor, user implementations of torch API functions should take care to exactly emulate the API of the function that is being overridden.

Functions in the torch API that do not have explicit overrides will return NotImplemented from __torch_function__. If all operands with __torch_function__ defined on them return NotImplemented, PyTorch will raise a TypeError. This means that most of the time operations that do not have explicit overrides for a type will raise a TypeError when an instance of such a type is passed:

In practice this means that if you would like to implement your overrides using a __torch_function__ implementation along these lines, you will need to explicitly implement the full torch API or the entire subset of the API that you care about for your use case. This may be a tall order as the full torch API is quite extensive.

Another option is to not return NotImplemented for operations that are not handled but to instead pass a Tensor to the original torch function when no override is available. For example, if we change our implementation of __torch_function__ for ScalarTensor to the one below:

Then torch.mul() will work correctly, although the return type will always be a Tensor rather than a ScalarTensor, even if both operands are ScalarTensor instances:

Also see the MetadataTensor example below for another variation on this pattern but instead always returns a MetadataTensor to propagate metadata through operations in the torch API.

Another useful case is a type that wraps a Tensor, either as an attribute or via subclassing. Below we implement a special case of this sort of type, a MetadataTensor that attaches a dictionary of metadata to a Tensor that is propagated through torch operations. Since this is a generic sort of wrapping for the full torch API, we do not need to individually implement each override so we can make the __torch_function__ implementation more permissive about what operations are allowed:

This simple implementation won’t necessarily work with every function in the torch API but it is good enough to capture most common operations:

It is possible to use the torch API with multiple distinct types that each have a __torch_function__ implementation, but special care must be taken. In such a case the rules are:

Testing Coverage of Overrides for the PyTorch API

One troublesome aspect of implementing __torch_function__ is that if some operations do and others do not have overrides, users at best will see an inconsistent experience, or at worst will see errors raised at runtime when they use a function that does not have an override. To ease this process, PyTorch provides a developer-facing API for ensuring full support for __torch_function__ overrides. This API is private and may be subject to changes without warning in the future.

This listing of functions makes it possible to iterate over all overridable functions, however in practice this is not enough to write tests for all of these functions without laboriously and manually copying the signature of each function for each test. To ease this process, the torch._overrides.get_testing_overrides function returns a dictionary mapping overridable functions in the PyTorch API to dummy lambda functions that have the same signature as the original function but unconditionally return -1. These functions are most useful to use with inspect to analyze the function signature of the original PyTorch function:

See this PyTorch tutorial for a detailed explanation and examples.

Documentations are available at torch.utils.cpp_extension.

Example available at this GitHub repository.